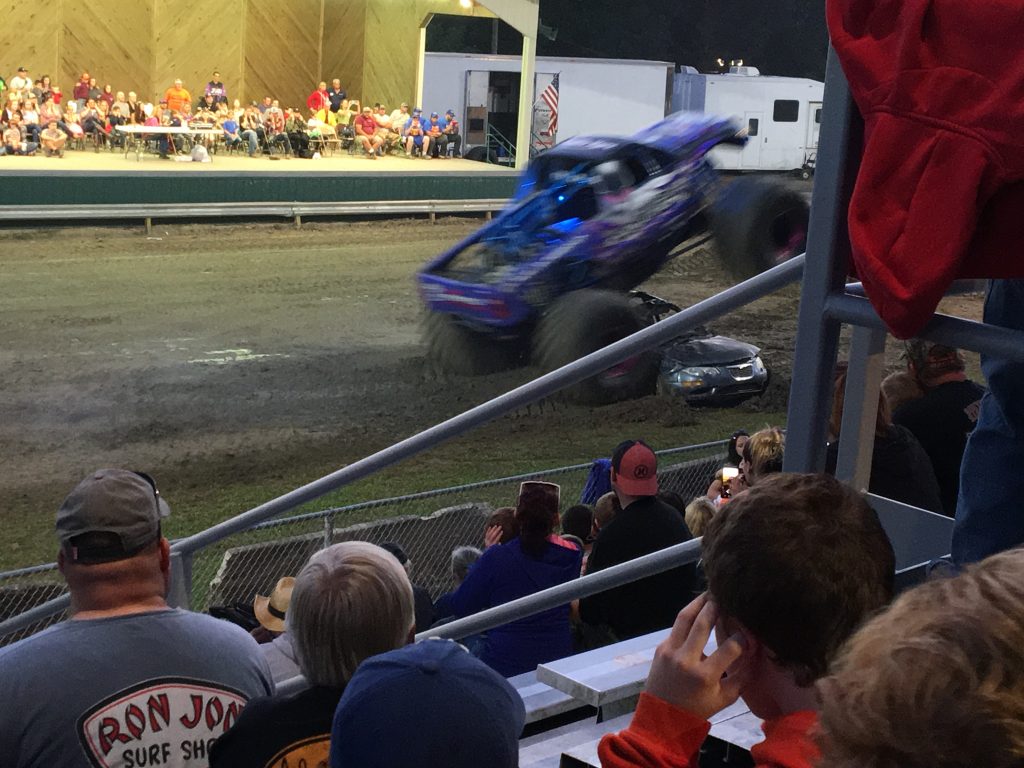 Last week, I entered a strange world and had some fun there.

The setting was the Harford Fair, held annually in my county. I had completed one of my stints at our booth for SCAN (Susquehanna Clean Air Network), a citizens action group I’ve been actively involved with for the past two years.

After my replacement arrived, I spent some time wandering around the fair. I did the kinds of things I’d usually do: ate some homemade fudge, admired the rabbits, got engaged with the mysterious lives of goats and sheep, listened to a bluegrass band.

Then I became curious about some mega-noise emanating from the arena and went over to see what was going on. It was a monster truck rally.

I’d never been to one. I’d never even heard of monster trucks. But there they were: the bodies of pick-up trucks and even one school bus mounted with elevated suspension on enormous tires. One at a time, these bizarre vehicles roared out from their place among a line of others. At full speed they careened over the tops of ordinary cars, flattened on purpose or from repeated batterings, to land with a great bounce on their mammoth tires. With an excess of engine noise, they also had to round a hairpin turn. Some of them almost tipped over at this point, to the anxious delight of the crowd.

Looking around at the audience, I thought: I really don’t belong here. I imagined standing in front of the crowd and telling them a bit about myself: liberal, mystic atheist, literary snob, enthusiastic communicator with the natural world. No doubt they would laugh.

But I didn’t want to leave. The spectacle gripped me. Watching those amped-up trucks bounce and teeter on their huge tires was a sport whose rules clarified with each melodramatic run. The crowd knew all the innuendos of the game, but even I, after a while, could judge which trucks performed best.

My feeling of being an interloper never left. I remembered the time I spent in the late 80s and early 90s on Navajo-Hopi lands, writing about a land issue that was affecting both tribes. I got used to feeling strange and out of place there—an Anglo who showed up in all kinds of places and asked a lot of questions. I got comfortable being an outsider.

That’s how I felt at the rally. I was a stranger but, like everyone else, I was immersed in the thing. I won’t go so far as to say I was cheering or groaning with the way things were going, but I was part of the crowd of monster truck watchers. I was a stranger in a land that didn’t mind having me there at all.

I have to admit I gave up on the last chapter of Roland Barthes’ Mythologies. I love philosophy, but semiology and deconstructionism, the endless paring down of something into infinitely small parts, frustrates me. I picked up a book of poems by Gerard Manley Hopkins, whose alliteration and onomatopoeia make you want to sing each poem like a song. For example (from “Inversnaid”):

A windpuff-bonnet of fáwn-fróth
Turns and twindles over the broth
Of a pool so pitchblack, féll-frówning,
It rounds and rounds Despair to drowning.

Degged with dew, dappled with dew
Are the groins of the braes that the brook treads through,
Wiry heathpacks, flitches of fern,
And the beadbonny ash that sits over the burn.

A young girl at the fair, about 14, sitting in a pen with three of her goats at about 8:00 at night. One of the goats rests its head on her lap. She stares dreamily into the distance as she strokes it behind the ears.

An excerpt from my new book, in the Bioneers blog.