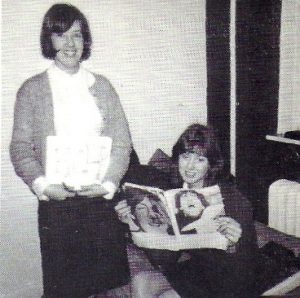 The literary deconstructionist Jacques Derrida once defined the best gifts as “the extraordinary, the unusual, the strange, the extravagant, the absurd, the mad.”

I love that! Gifts are not supposed to be practical. They’re supposed to say something special about the giver, the recipient, and the relationship between them. They speak—both loudly and intimately—of something those two people share. Some people are really hard to give gifts to; nothing ever seems right for them. Others are easy. My brother, for example, loved presents I’d make for him, and his wish for such gifts always inspired me to create all kinds of special things for his birthday and Christmas.

One of the best, most extravagant, maddest gifts I ever received was from Carrie Pandis, a woman I’ve been friends with since we were sophomores in high school and both in love with the Beatles and English literature. Several times when we were in high school, we gave each other the newest Beatles album for Christmas. But a few years ago, she gave me a great gift I myself never even came close to.

She told me about it later on. She had gone to a Paul McCartney concert in Omaha, where we both grew up and where she still lives. The audience was much different now, she said, than it had been in the 60s, when we saw the Beatles perform live. Now, you could actually hear the music. Moreover, between songs, Paul would chat with the audience, and then, too, the theatre was quiet enough so people could hear.

When Paul paused in his comments, Carrie saw her opportunity.

And then, she added, “Trebbe Johnson loves you, too!”

What a gift was that! She not only shared her own feelings in a space that not many people would dare to intrude upon, but she further commandeered that space to include me as well.

What extraordinary, unusual, strange, extravagant, absurd, mad gift that you’ve received has made a lasting impression? If you describe it a bit in the Comments below, others will be able to share in your delight!