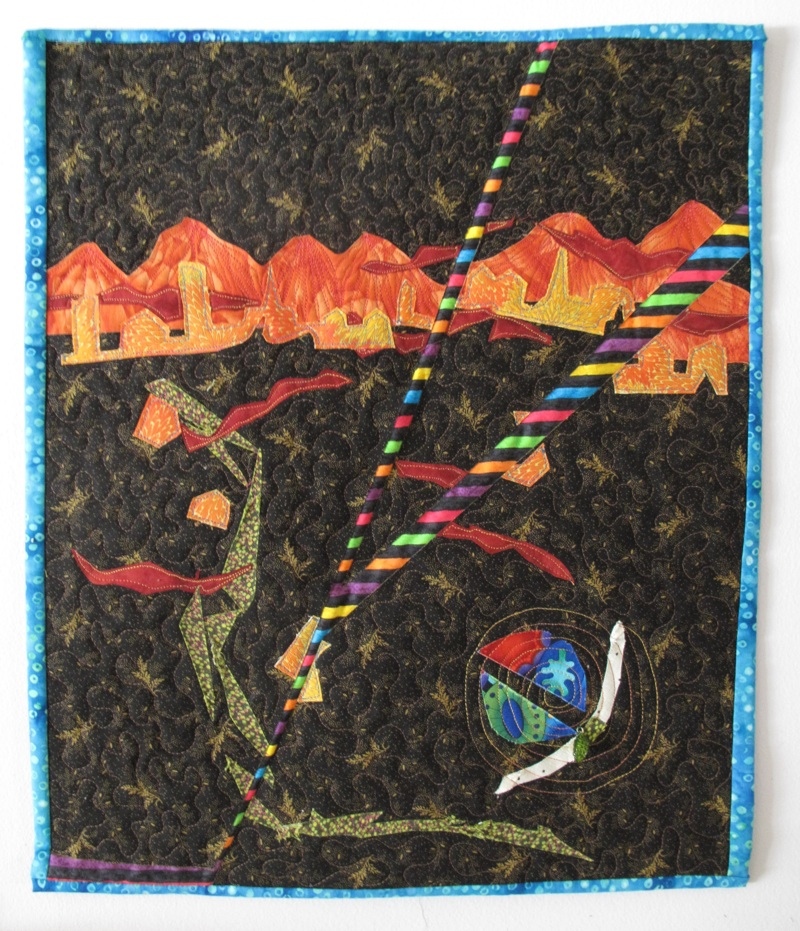 When I heard that my friend, Virginia “Gina” Kellogg, a life coach, co-founder of Leadership That Works, and quilt artist, is starting a new project called Journal Quilting, I decided to repost an article I wrote several years ago in my previous newsletter. Quilting your fears, your longing, your visions is a powerful way to clarify and sync with your own emotions, and in the process you create something meaningful and beautiful.

Gina began quilting in 2006, as a way of expressing her deep grief after her brother died. Since then she has created dozens of what she calls “journal quilts,” works in fabric that are creative responses to emotional states. A few years ago, when gas fracking came to northeastern Pennsylvania, she decided to share what she has learned with others.

As most people know by now, fracking is short for hydrofracking, a technique that entails blasting a mixture of sand, water, and chemicals deep into the Earth to release natural gas. In 2008, the industry invaded our quiet, rural area with noise, light pollution, contaminated water wells, exploding gas wells, fissured roads, and leaks in pipelines. It has also caused physical, psychological, and social damage to individuals, families, and communities. Five women accepted Gina’s offer to explore their feelings through the process of making a small quilt.

Meeting on a Friday night at Gina’s house, we began by choosing a square of fabric from one of the antique quilts that Gina collects. We used that piece as the seed for the rest of the quilt. In my quilt, pictured above, the seed pieces are the jagged green shapes that represent the fracking penetrating the land.

Gina has an enormous collection of fabrics that we could choose from to build our quilts. As we worked, she was there to answer questions and provide guidance, but as she frequently emphasized, the point was not to make a “good” quilt, but to express our deep feelings . When we got stuck, she urged us to pick a fabric we “hated or would never consider using.” An essential part of the process was to “frack” our quilts themselves—cut them up—after we had gotten the design just the way we wanted it. Although most of us felt some reluctance to do so, slicing through the design helped us to realize that we did not have to hold on to what we were attached to.

My quilt is called, “They are Piercing the Earth, and All, All, All Is Falling into the Cracks.” The yellow and orange shapes represent the hilly landscape in this area and the towns and farms nestled in it. The fracking is cutting deep into the Earth, and the villages are collapsing. The large striped “crack” that runs from top to bottom symbolizes the extent of the fracking, which fractures not only the Earth but families and communities as well. The circular part on the lower right is still a bit of a mystery. It seems to token life and growth and wholeness, even at the depths, when everything around you seems to be irreparably broken.

All of us felt transformed by this experience. We were able to express feelings about the gas drilling that we had been unable to articulate in any other way. Sharing our stories about both our experiences with the gas drilling and, as we moved through the process, the design of our quilts, made each of us feel less alone. And by transforming fear, grief, and anger into a creative act, we became empowered and ceased to be victims of an overpowering force.

I am looking forward to Gina’s upcoming Journal Quilting project.