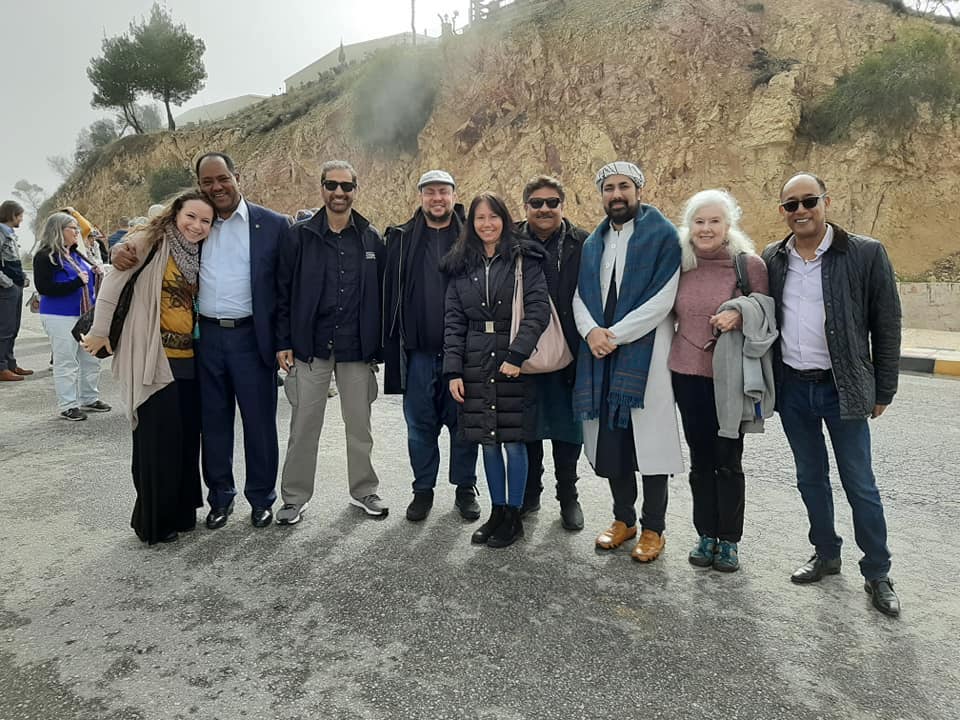 In my last blog, I wrote about Andi Olsen’s short video, “Where the Smiling Ends,” and how it made me feel as if I had been granted the brief, momentary gift of seeing people’s souls shimmering within their anonymous bodies.

Ever since I wrote that, I’ve been thinking about smiling in other contexts. For example, in February, I was part of an extraordinary delegation of spiritual leaders, peace activists, and ecologists traveling in Israel, Palestine, and Jordan. Whenever we reached a new stop, people would gather together in small groups and have somebody take their picture. Throughout the journey and afterward these photos kept popping up on social media.

Over and over I found myself baffled by this impulse to group and smile. Sometimes it actually seemed inappropriate. Why, for instance, were we organizing ourselves in this way as soon as we stepped out of the bus at Mt. Nebo, the legendary summit from which Moses is said to have stared out over the valley and the Jordan River to see the Promised Land that God had forbidden him ever to enter? Wouldn’t simply gazing in sympathy or even bending down to touch the soil be a more heartfelt response for us?

Why, when you came to think of it, would we even want to pose for a photograph at such a place? To show people at home that we had spent time at a famous place with likable people? We were a very diverse and compatible group. Maybe our photo-ops were an unconscious way of indicating that these places, some associated with all three Abrahamic religions, some of special importance to either Judaism, Christianity, or Islam, could be touched and honored by people of diverse faiths? Or is having your picture taken at a famous place and smiling happily for it simply an act so engrained in our psyches that we don’t question it? (Not that I didn’t participate. Here’s a group photo I myself happily joined at Mt. Nebo.)

What do you think?

What I’m reading—and more about smiling

After finishing Nuala O’Faolain’s Are You Somebody, I picked up her second memoir, Almost There. It’s shorter and more loosely organized and, frankly, I’m finding it a little thin, as books authors write as follow-ups to their previous bestsellers often are. Nevertheless, I perked up when I read what she had to say about smiling when she visited the September 11 shrine at the site of the World Trade Towers and looked at the photographs of those who had been killed:

“…[H]ow happy the missing looked. No one had ever posed for a photo appropriate to being missing. Ordinary people are photographed when they are rejoicing, and here they were, beaming in tuxedos from behind littered restaurant tables, poised in bathing suits to dive from a jetty, standing proudly behind a bar mitzvah boy, coy in a bridesmaid’s satin dress. Every single one of them was smiling.”

Which photo of you or of me will be the one to depict our life after we’re dead?

I love to dance. Not having any dance opportunities available where I live, or even within a reasonable drive’s distance, has been one of the hardest things about leaving New York. A few days ago a friend of mine told me about Soul Motion, an on-line dance session with Michael Skelton that she participates in every Sunday. I joined for the first time last week, and it was a dream come true—an hour and a half of dance to great music with lots of variation, occasional gentle but deep guidance by the facilitator, and time afterwards for sharing responses. Cost is your choice, from $5-$20. You dance in your own home with more than a hundred people from around the world dancing in their own homes. And it’s live. I hope that other dancing fools among my readers will join me! Here’s the link: