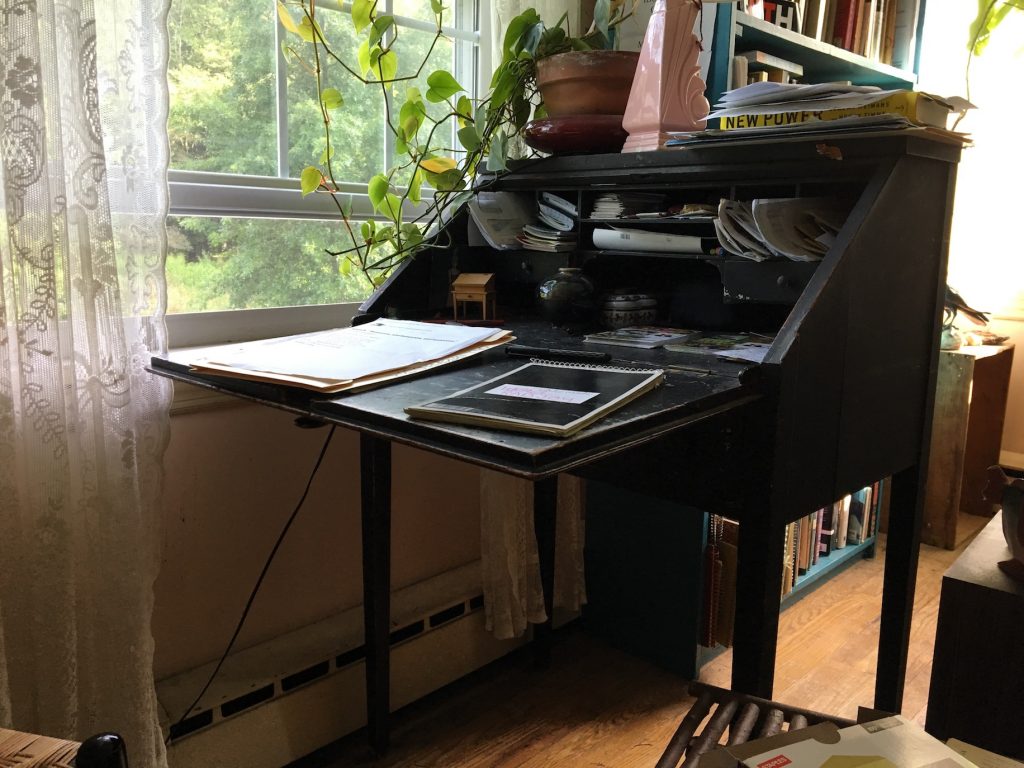 Here’s a passage from Julio Cortazar’s Hopscotch that caught my attention:

Why is it so necessary at certain times to say: “I loved that”? I loved some blues, an image in the street, a poor dry river in the north. Giving testimony, fighting against the nothingness that will sweep us all away.

Thinking about loving things made me think of my little black desk, which has been with me for 47 years.

I found it in a bathtub. My first job out of college was working as a personal assistant to Erich Segal, then wildly popular for his tearjerker novel, Love Story. When I moved to Cambridge, Mass., where he was living, I visited a realtor to look for an apartment in the Harvard Square area. In one of the apartments he showed me was this sweet little black desk standing in the bathtub. It was no antique, there was nothing elaborate about the construction, and it wasn’t varnished, just painted black. But it had little cubbyholes to put things in and a drawer underneath the hinged top. And I needed a desk.

I ended up taking another apartment that the realtor showed me that day, but as I was moving in, I called him and asked him if I could have the little black desk. He said yes. I went over and got it and carried it myself the few blocks to my new place. It’s been with me ever since.

This little desk has supported my writing of poems, essays, multimedia scripts, checks for my bills, love letters, notes from business calls, and books published and not published. It’s lived in two apartments in Cambridge, five in New York City, and now it resides here in northeastern Pennsylvania.

I have two other desks in my office now, but the little black desk holds the position of prime importance, right by the window overlooking the garden.

It is important to love things and to gaze at them fondly, perhaps stroke them now and then with gratitude for their enduring presence in your life.

What things do you love?

Still reading Hopscotch (Cortazar; see above). Since the book “hopscotches” around in a non-chronological (though anything but random) order among the chapters (146-29-107-113-30), you never know exactly how many pages you’ve read. Moreover, you’re never sure, how each chapter links up with the ones before and after. You have to think about it, with your intuition and sense of play as well as with your intellect. Sometimes the narrative is clear, other times you have to search for the transition, the underlying current. I wish I could have written this book.

Andy and I had dinner on Saturday with two friends who live most of the year in London but spend a couple of summer months in their house on a nearby lake. Each year the lake has a special Lake Day for residents that concludes with fireworks. This moment occurred on the dock of our friends, with whom we’d just had a great dinner. It was a chilly night, and the four of us were  sitting on plastic chairs bundled up in fluffy afghans, talking about an ancient site in Turkey that we’d all visited a few years ago. As we talked, we looked across the lake, its water the color of tarnished silver, awaiting the fireworks that would appear from a dark hill on the far shore. I  was thinking of how the bang of the celebrations would disturb birds and animals and feeling badly about that, and at the same moment I was loving that sense of coziness and ease, being all wrapped up in friendship, afghans, the prospect of dessert, and just the loud, flamboyant way Americans like to celebrate.

One thought on “I love my little black desk”