At a dinner party recently I was hit with yet another blinding flash of the obvious about white privilege. I was talking to the man siting next to me about how we choose to exercise. He said he likes to work out on the treadmill in his home. I said I prefer talking walks. I mentioned that the neighborhood he lives in has lots of interesting places to walk.

Oh. I got it. White privilege is assuming you can walk safely and unchallenged through your neighborhood.

When I first heard of white privilege a few years ago, I misunderstood it. I thought it had to do with believing that, as a white person, you’re superior in some way. But then I began to see that what it really means is taking for granted that you will, in very many circumstances, be assumed to be harmless, whereas, if  you’re black in the same circumstances, you could easily be assumed to be dangerous.

I’m eager to learn about white privilege and what it’s meant in my life, because I realize that until white people recognize the advantages they’ve taken for granted about how they’re perceived, the deep racial scars of this country can never be healed. That means I have to be open to being teachable. I can’t hold onto any old ideas I might have that my attitudes and behavior are unimpeachable. I have to be okay with being uncomfortable now and then as I grasp realities I’ve taken for granted—and that a person of color has rarely had the privilege of taking for granted. I have to imagine how my world and my life would be different if my soul inhabited skin of a different color.

Speaking of white privilege… I am also noticing it more in things I read and watch. I’ve been reading John McPhee’s new book, The Patch, a collection of pieces he’s written over the years but never published. One story is about a time when he locked his keys in his car in New York City. He rummaged around in a trash can until he found a piece of wire, which he then stuck through the siding in the door and maneuvered around in an effort to pull up the lock (it was in the time when doors locked with buttons you pushed down). Two police officers came by and actually helped him get into his own car. McPhee marveled at that assumption of his innocence. And I thought, Well, it would have been a lot different if he’d been black.

That aside, I recommend this book. I love McPhee’s writing, which I discovered when he used to write very long articles for The New Yorker about geology. I’ve read McPhee on topics I don’t much care about like oranges and golf, whereas I’d skip lesser authors covering subjects that enthrall me. 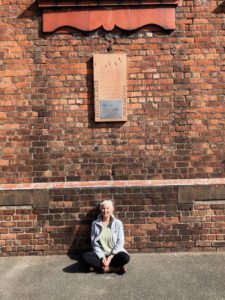 I was in England last month to lead a workshop in Kent, near London. Before that, I spent a couple of days in Liverpool, making a pilgrimage to the hallowed ground of The Beatles, whom I have wildly loved for 55 years. I took a 7-hour private tour of all the great Beatles sites, and the most outstanding of all was the Woolton Church Hall, where John and Paul met in 1956. Here history was made!