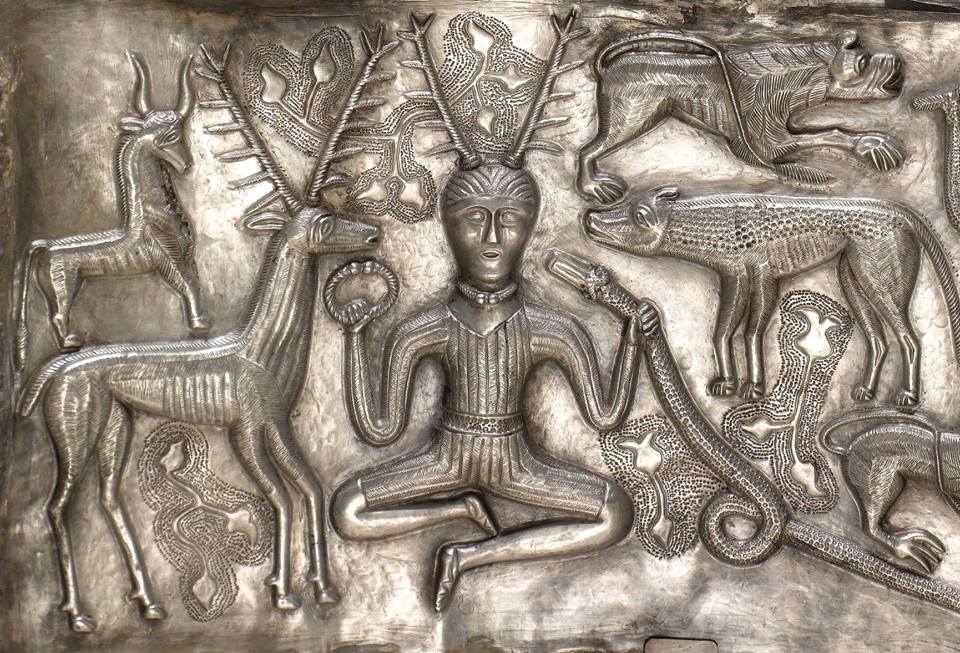 This beautiful image is from a silver cauldron, the Gudestrup Cauldron, found at the end of the 19thcentury in a peat bog in Denmark. I discovered it on the internet a few days ago when I was researching the Underworld for an article I’m writing, and I’m captivated by it.

One side of the cauldron shows a man, sitting cross-legged. He has antlers on his head, just like those of the stag to his right (our left). Also to his right is a long-horned sheep. To his left right are a boar, a dog, a snake, and an unidentifiable other animal departing to another side of the cauldron. The man and animals seem to be allies, or at least they inhabit the same realm comfortably together.

Though it was found in Denmark, the cauldron, dating from about 150 BCE, is believed not to have been made there, but in a Gallic land, possibly Ireland, where silversmiths, artists, and believers in the World beyond the known world would have been familiar with this imagery. In Irish myths Cernunnos, horned like the figure in this cauldron, was the god of fertility, animals, life, wealth, and the underworld.

Most of us think of death and the Underworld being the end of life and fertility. But in the myths of many cultures, the goddess was associated with both the moist, black, mysterious chasms of fertility and with death, for the Earth both took life and gave life, seemingly at random. It’s interesting that this figure is masculine, for men are not typically associated with fertility. When the Greek god of the Underworld, Hades, wanted life beside him, he abducted the young woman Persephone. (She was picking flowers when he grabbed her.) He could not generate that life, that blossoming on his own.

In modern psychology, the Underworld and fertility are passionate, if uneasy, partners. The Jungian writer Christine Downing, among others, has written that a descent to the psychic underworld can result in new openings of creativity.

In my own life, I find that times of chaos so thoroughly rip me open that I see the world in a new way. I have more compassion for other people. My actions become more significant; nothing seems accidental or unimportant.

Ever since I started reading Look at Me by Jennifer Egan a few days ago, I have been grabbing every conceivable available moment to open it and read it. Breakfast! My heart leaps with anticipation! I can get in maybe 10 minutes of reading! A visit to the lawyer’s office: maybe he’ll be late and I can read for a few minutes. This book is about four interwoven characters: a model whose face is changed by a terrible car accident, a teenage girl who misunderstands the clues of the world as she looks for depth and connection, a private eye trying to stay sober, and a mysterious man of many disguises with a massive grudge against America. It’s about identity, secrets, need, and appearance. And Egan is a powerful writer.

The west is burning. The rainy season in Bali has lasted for over a year. Europe’s in a heat wave. And here in Pennsylvania, we have been having torrential rains all summer. Creeks are flooding, stones racing over the road on the backs of muddy streams. The other day, when one of those storms ended, I went to the nature preserve a mile from our house. It’s a wetland area, and the sound of water rushing was everywhere: deep, shallow, trickles, roars. The trails had turned into rivulets. After sloshing and exploring around for a while, I sat on a damp log and just waited for the world around me to assert itself. A spider crawled down the trunk of a sapling beech tree. The waters kept running. Breezes shook raindrops off the trees. And gradually, the late summer insects started chirring and cheeping after they had fallen silent at my approach. The place had forgotten about me. What a relief to be there for that!